Public and gallery spaces in the city centre until the 15th of June are taken over by the Ljubljana festival of light once again. 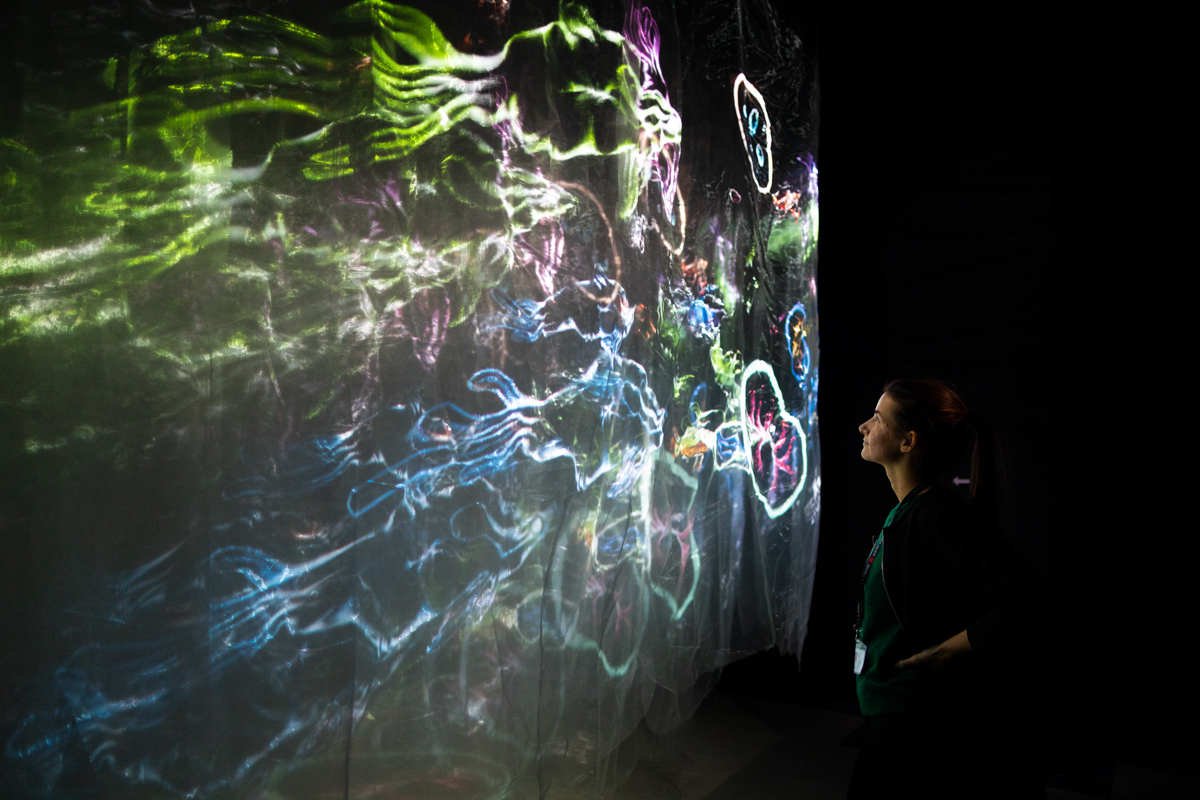 In the Match Gallery there are three projects on display.

Soap opera (K01 M04 J01) – The Cave represents the first in the series of works that explore the borders between the individual experience of the world and the specific collective experience of it. An interactive mechanical device uses soap water to create fragile membranes that produce almost psychedelic textures of colour and light: the project is a literal depiction of immersion into a given reality that challenges the viewer by having seemingly omnipresent structures vanish into nothing. The installation allows for an experience of a momentary creation of some kind of a spatial divide that reflects the insecurity and fragility of experiencing reality, the instability of the balance between the subject and the world.

Stran 22 is an interdisciplinary collective from the Slovenian Littoral that includes several artists from different fields – from visual and performative arts, architecture and design to original music and poetry. They have an interdisciplinary approach and a strong wish to explore new unconventional artistic expressions.

The project of the Iranian-French tandem sets out to explore the borders and transitions between the fictional and the real, between artistic imagination, digital technology and science – mostly biology, where the creator of the concept, Golnaz Behrouznia, often finds inspiration. Reality is scanned for different data parameters that influence the appearance and movement of weird beings that look like microscopic creatures floating in darkened space. The project addresses the topic of nature, environment and co-dependency of different biological elements that lead to the creation of life and evolution. These fragile and helpless creatures hint at the thin divide between them and the organic world.

Golnaz Behrouznia (1982, Shiraz, Iran) started by studying sculpture at the academy in Teheran, later completed digital media studies and turned into multimedia projects. She presented her works in many acclaimed exhibitions and contributed to many festivals. François Donato (1963, Mont de Marsan, France) studied music in France, and in the early 90’s started to explore the power of new technologies in sound production. He’s been an active member of Paysaginaire, association for development of electroacoustic music and loudspeaker orchestras since 1994. His compositional works often contribute to different chorographical, musical and multimedia events.

Light paintings-objects made by the Dutch artist Elcke van Gorkum, usually appearing in public as Surreal Visuals, radiate images of rhythmic geometrical patterns that disappear in the infinite space. The viewers can see themselves when faced with her works, but also is seen against an abstract space, a hypnotic tunnel structure that literally sucks you in. The artist’s works play with the viewer’s perception with their 3-dimensionality and interplay of analog and digital elements. These exude a plethora of shapes and colours; a kaleidoscopic visual structure, which makes for a unique meditative experience.

Surreal Visuals (Elcke van Gorkum 1983, Eindhoven, Netherlands) is an artist focused on audio-visual light projects and a VJ. She graduated in 2016 from the academy in Tilburg and soon received the Foederer Talent Award. She is a regular contributor to the Glow festival in her hometown where she produced several projects and exhibitions.

More information about the festival: www.svetlobnagverila.net